Bio and vision of the CEO 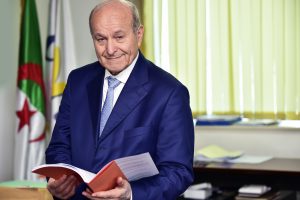 “Think big, start small and move fast.” This motto, a kind of mantra, has brought success to Issad Rebrab.

The founder of the Cevital Group, Issad Rebrab was born in 1944. He set up his own accountancy practice in 1968, before becoming an entrepreneur, establishing companies in the metal industry in 1971 and in the iron and steel industry in 1991. Under his leadership, the Cevital Group is continuously expanding and diversifying its business activities, and it now has 26 subsidiaries in industry, food-processing, mass distribution and even the automobile sector.

In recent years, he has been expanding the Group’s operations beyond Algeria, particularly in Europe (France, Italy, Spain), Tunisia, Morocco and Brazil. In France, Issad Rebrab bought out the SME Oxxo (manufacturer of high-performance windows) in 2013, re-launched domestic-appliance giant Brandt France in 2014, and acquired specialist steelmakers Luccini in 2015.

Issad Rebrab has been Chairman of the Board of Directors of the Cevital Group since 2008. He has five children, all of whom are involved in the management of the Group. In 2009, Cevital’s decision to admit independent members onto its board of directors broadened its governance. This decision was motivated by a desire to support the growth of the business and guarantee its sustainability, following in the footsteps of other large multinationals.

Issad Rebrab was voted CEO of the year at the Africa CEO Forum 2015 and Personality of the Year in 2016 by the Tuscany region in Italy, following the resumption of operations at the Piombino steel-making plant.

“The idea is to move Algeria from importer to exporter in the post-oil economy, to make it Africa’s new behemoth, an emerging economic power that is growing globally, letting loose initiatives, creating employment and wealth and rising in the ranks of the new industrialised nations.

Time is not on our side. The population of Algeria will reach 50 million in 2025, with each person consuming fuel and electricity, and we will have 10 million new jobseekers, for whom we will need to create one million jobs per year.

We have little time left in which to diversify our economy. Cevital’s revenue has increased 100-fold in 15 years. We intend to make it seven times bigger again by 2025, from $4 billion currently to $25 billion in 2025. To achieve that, we need talented people.

We will increase staffing levels from 18,000 today to nearly 100,000 in 2025 and make massive investments in the training and recruitment of talent.”

Born in 1950, Ahmed Nemmar obtained a degree in economic sciences followed by a master’s degree in business management.

He started his career with the Sonelgaz Group as Manager of Provisional Management before moving on to the role of Head of the Studies and Accounting and Tax Rules Division. In 1991, still with Sonelgaz, he was made Deputy Manager of Budgets and Investment Management, before being appointed Manager of Accounts and Management Control in 1999. In this position, he spent five years modernising the company´s accounting systems, rectifying the position of Sonelgaz´s accounts. From 2004 to 2006 he held the position of Audit Manager, during which time he created the Group Internal Audit Department.

Ahmed Nemmar joined the Cevital Group in 2007, where he is now Deputy Chairman, in charge of finances and supporting duties.